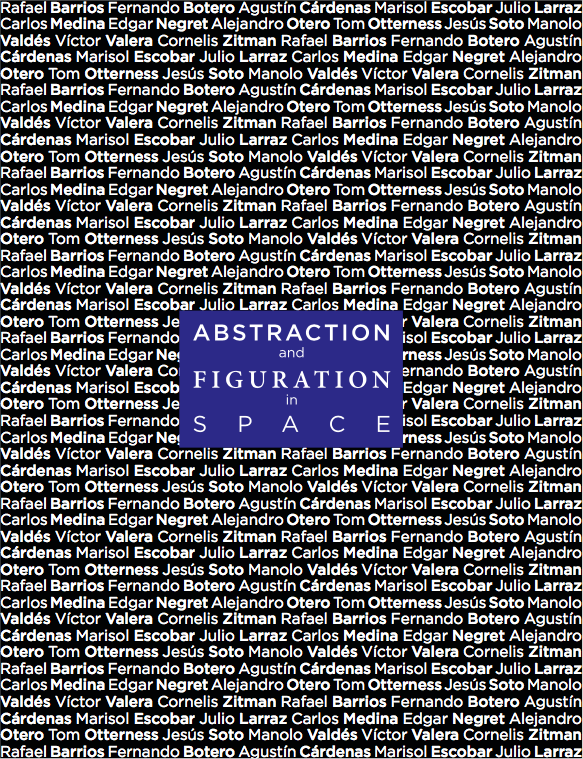 ABSTRACTION AND FIGURATION IN SPACE

ABSTRACTION AND FIGURATION IN SPACE

As the object and subject of man’s existential endeavors since the dawn of humankind, three-dimensional work, in all of its manifestations, has always expressed a conceptual essence. In the absence of historicist criteria, creative artists have never abandoned their interest in nature, at times mimicking and at others transforming it into abstract concepts with particular esthetic principles and narratives which vary in formal simplifications, esthetic values, and even in their thematic contradictions. Like other artistic manifestations from the second half of the last century, the sculpture has developed spatial proposals resized both abstractly and figuratively and inaugurated a new sensibility that rapidly matured, a far cry from clever juggling games and mechanical resources. These works, by their avant-garde vitality, belong to an era emblematic of the development of form in space. Jesús Soto (1923-2005), Alejandro Otero (1921-1990), Marisol Escobar (1930-2016), Edgar Negret (1920-2012), Víctor Valera (1927-2013), Agustín Cárdenas (1927-2001), Cornelis Zitman (1926-2016), Fernando Botero (1932), Manolo Valdés (1942), Julio Larraz (1944), Rafael Barrios (1947), Carlos Medina (1953) and Tom Otterness (1952), all of international recognition, constitute an important founding group of contemporary sculpture. This group’s influence has extended across borders to develop an avant-garde that still maintains important distinguishing characteristics, such as noble elegance in execution, respect for materials, frugality of means and a powerful expressive quality both formal and esthetic, thus reordering the quasi chaotic proliferation of trends typical of the last decades.

Featuring thirteen artists, this exhibition ventures into novel visual territories of abstract and figurative contemporary sculpture, claiming a place in present-day art history. Beginning with the Venezuelans, Jesús Soto and his extraordinary Mural (1967), whose incorporation of time-energy as the fourth dimension and the optical fragmentation of form have placed him as the most important pioneer of international kinetic art; Alejandro Otero presents Abra Solar (1981-1983), an aluminum sculpture revealing his explorations of public space; Víctor Valera presents the first manifestations of abstract-geometric sculpture in the country, but whose titles refer to the figurative universe: Lanzador de dardos and Marilyn mata a un Gallo  (1962); Carlos Medina in Fragmento de lluvia (1989) and Círculo Total III  (1996) begins his research on the behavior of geometric shapes in space; while the works of Rafael Barrios, Verticale Disloque (2018) and Móvil Espiral Fractal - M596 (2019) demonstrate his continued interest in optical-kinetic and real-unreal visual research; the sculpture Magritte II (1998) by the great master Marisol exemplifies her important contribution to the pop trend; Cornelis Zitman's three bronzes, La Desconocida (1972), Bailarina Descansando (1995) and Divertimiento (1973) resemble figurative poetics, like those of American Tom Otterness, Immigrants Family (2007) and Innocent Giant (2017), sculptures which are full of humor and to a certain extent, social critique.

From Colombia, Edgar Negret and his peculiar geometric assemblies painted in bright colors, Torre Roja (1979), El Sol Rojo (1994) and Puente Colgante (1998), evoke natural forms and his ceaseless interest in industrial machinery; and Fernando Botero's two bronzes, Woman in Bed (2014) and Ballerina (2015) are centered around the female figure, the traditional theme characteristic of his work. The sculptures Little Horse (1989), Totem (undated), El Violinista (1989) and La Famille (1990) by Cuban artist Agustín Cárdenas are figurative, nearly biomorphic forms loosely referring to his Afro-Cuban culture. Last but not least, we have Manolo Valdés and Julio Larraz. In Valdés' Regina con Sombrero (2006), we witness the artist's fascination with carving and rearranging the wood medium to build a figurative sculpture; and the bronzes The Ark (2020) and Habeas Corpus (2007) impose the hyperrealist style charged with social sarcasm that permeates Larraz’s work.

The creative work of these artists, many of them painters as well, pertains to a vital development in ethics, esthetics and fine art with roots in some of the most important historical avant-gardes, the builders of universal contemporary art history.

Click here to watch the preview of our collective exhibition!