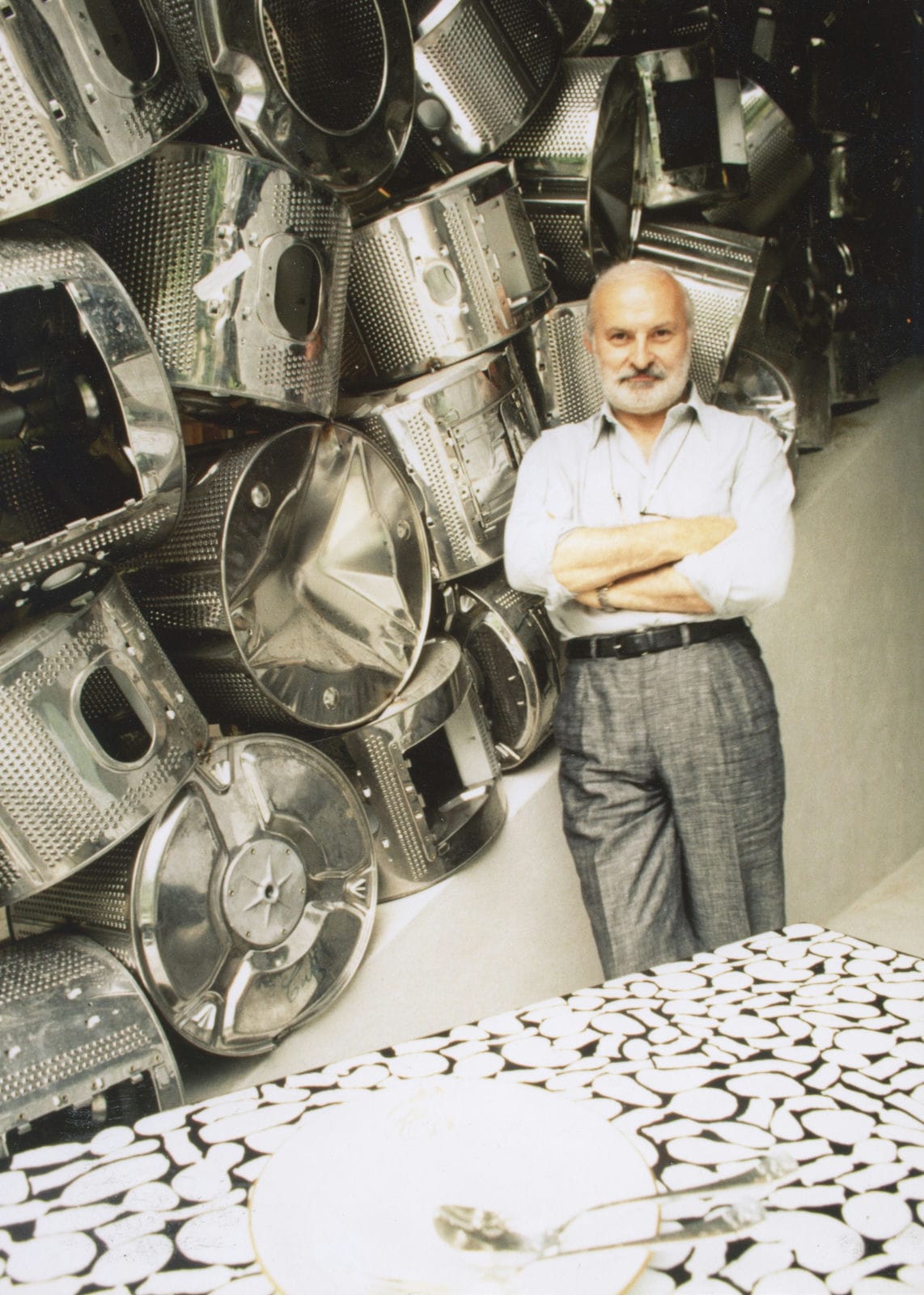 The Arman Conceptual Perception exhibition was conceived in association with the Arman Marital Trust.

The most significant works are illustrations of a statement about the history of objects in our civilization, but before anything else…a work of art. Arman, fax to the author, October 15, 1996.

Arman’s prominence in the history of late modern and contemporary art is renowned; and his drive to consider and reconsider the correlation between objects and pictorial representations of them has proven to be a rich field of creative action, which he ceaselessly mined. By means of deconstructive and re-constructive methods, he created works where the interplays and tensions between the materiality of object and “the emotional substance of interior reality have yielded an expressive visual language, a teasing-out and filling-in of breaches between sculptural and painterly practices. His background in painting and his expertise in the study, analysis and collection of objects align these pathways in works that are distinctly Arman’s. Early on, he articulated his methods in terms of a logical progression using processes such as stamping and imprinting surfaces, slicing through works associated with sculptural forms and music, and re-configuring them to reveal subjective essences through material arrangements. With the artist’s accumulations of things, the impact of a single object is amplified, while the destruction of a single object such as a musical instrument conveys pathos imbued with the memory of sound reconceptualized in a pictorial arrangement. With this physical transformation of the recognized, the already-seen, he proposes that new relationships can emerge in new material realizations, a reconnaissance; an acknowledgement of the things -- both rare and mundane -- that exist along with us and with which we interact in a myriad of ways. Arman maintained: “It is the response you get from seeing all those objects together, the shape, the size, the color…that is important to me. The first goal is the visual experience…”

In the Paint Brush works begun in the late 1980s, that visual experience is one of dynamism, or more precisely, the apt phrase, “kinetic rhythms.” In both the bicycle works and The Starry Night images that comprise the Paint Brush series, visual and material movement is at the core – there appears a co-existence of the artist’s making of the image in time, a durational process, and the viewer’s impression of visual instantaneity.

A photograph of Arman in his studio in Vence taken in 1991 illuminates this point apropos the bicycle theme in the Paint Brush works. Arman is seen applying a white ground to the canvas on which fragmented bicycle parts, with some visible paintbrushes, are arranged on the horizontal plane. He is creating a typological ground with a surface of relational parts, which results in a pictorial choreography in an overall composition that will become highly animated by paint-laden brushes of colors applied in gestural strokes, as seen in the completed works hanging in the studio. There is underlying constancy of process and motif in this series, but the visual effects resulting are manifold. All contain a sense of visual energy – some centrifugal, some centripetal – a dynamic realized by the compositional organization of varied and multiple parts. As Arman put it, “in my painting, the object is but a pretext, but it is always present.”

The circular form is a recurrent motif in the artist’s work, often related to both seeing and time whether in his accumulations of clocks, glasses, cogs, headlights or bicycle wheels. In these bicycle painting/reliefs, the paint brushes appear as if actively accumulating along with the rounded fragments of the wheels, spokes, tubes, and tires amidst the cut frames, inverted seats, and released chains all cohered in the immediacy of the overall painterly effects. The choice of the bicycle, one rooted in visual culture, is an emblem of mobility and progress yet with echoes of time and memory; with wheels moving forward in time and space, and then, returning back to progress forward again. The philosopher Henri Bergson’s concept of creative evolution comes to mind, a cyclical recurrence of forms that exist in duration and memory returning anew in the present and gesturing towards the future.

The efficiency of the bicycle, a design premised on activation by human movement, is a balancing act of stability and instability. In its use, the spatial experience is paramount and captured in Arman’s series by means of vivid hues evoking sensations and sensibilities felt across the gap of external and internal realities generated through action. This vibrant reprise of a motif, one present since his early works, is indicative of its conceptual importance to the artist over time -- from lyrically abstract all-over images made with inked bicycle chains of the late 1950s; the prominence of a bicycles in his groundbreaking installation Le Plein (1960); to Homage au Voleur de Bicyclette (1978), the 1990s Emersions in which the bicycle appears to sink into an ash ground; and likewise, the sculpture Philemon et Baucis (1991) in which two bicycle are covered with a patina as if retrieved from the ocean floor. In Slow Motion (1995) and Tour de France (1995), we see accumulations of bicycles, one group arranged to evoke a tipping over as if witnessing sequential photography, while the latter, mirrors the line-up of a world-class sporting event. This metamorphosis of the bicycle is ongoing with a breadth of references from modern art, film, mythology, archeology, photography, sports, leisure, competition, and the fundamental sensations of use. As a sign, it is visual constant signifying the open-ended and the reflective, giving form to the experience as an image.

Arman’s facility as a colorist is especially notable. As he put it, “I can go freewheeling and paint. I still have this organic need to touch color.” Arman’s richly painted surfaces are especially evident in the bicycle series, but color, too, has an enduring role in his oeuvre from the sheen of industrially painted and assembled car hoods in the Renault series to the streams of color encased in plexiglass in works such as Waves After Waves and Couleur Traçant of the late 1960s up to the paint brush works in which single color is applied along with the brush to transparent surfaces collapsing the material of making into image. Particularly noteworthy is a photograph of the artist taken in 1989 as he systematically walked across a grid-arrangements of paint tubes, wherein he was experiencing directly the spurts of color in a process that is methodical yet playful. In the Arman’s chromatic combinations and his ease with the materiality of acrylic paint in the bicycle series, he fashioned an impasto surface raising to the level of relief with the brush handles along with skeins of paint trails and fluid stokes meshing the frames, rims, handlebars, and chains into visually kinetic arrangements, where the internal rhythm of the whole coalesces. Each of these works have distinctive ambiences generated through this synthesis. The grit and density of the urban space is conveyed in the overall muted palette of Untitled (1997) with its street bike handle bars, jumble of rims, chains, tubing, crank arms, and frame bars tilting up in action; by contrast, La Boda de Nieve (1991) is lyrical with the sensations of lightness and aerial motion in color and spiraling forms akin to a musical fugue. What they share is visual immanence – the seasonal palette of Yellowciped (1991) traversing space amidst vertical pours and drips of yellow and blue and like-valued secondary colors is suspended as if dampened in a grainy wash of all-over color trails; while youthful energy can be recognized Untitled (1995) with its spring-like palette in an exuberant atmosphere with brushes and color strokes spiraling outward amidst the multiplicity of parts set in motion in an atmosphere of gentle levity. The underlying darker palette of the picture plane concentrates the more sober hues and density of paintbrushes in the works Under the Volcano (1992) or Couleurs Sourdes (1996), which pull the viewer deeper into the profundities of these works.

When Arman turned to Van Gogh’s iconic The Starry Night (1889) painted in Saint-Rémy-de-Provence, he posits a new and different relationship with this modest-scaled pantheistic ode to worldly and celestial energy. Arman implicates the body in his reconceptualization of this work by means of scale and visual intensity, articulated by and with the accumulation of paint brushes and varied layering of acrylic colors. In Van Gogh: Starry Night (1994), the multi-panel composition, each brush stroke is testimony of decisive movement while the townscape is constructed using the wood of the brush handles in tandem with color to fabricate the weight of this area yet balancing it with the expanse of the aerial, retaining the malleability of the whole. In this orchestration of parts and image, Arman is offering a visual appreciation, an homage, to an admired artist, one who like Arman identified himself a century earlier with the single name Vincent. Arman re-inscribes this culturally laden painting into his oeuvre registering the cosmic space with a forceful sense of matter. Apperception, central to the experience of both of these works, establishes a communication that is complementary and dialogic, an affirmation of painterly expression.

Arman continually returned to the subject of the musical instrument elaborating this theme in countless variations. Bernard Larmache-Vadel described this tendency as “a continuous process of declension based on a conceptual projection. This conceptual projection was early in its formation in the artist’s work. Arman was informed by the experiments of concrete musicians, notably Pierre Schaeffer, who used everyday objects to produce sounds generated by hurling select object, then recording impacts of materials as extra-musical sound derived from the everyday. In parallel, Arman re-envisioned the musical instrument itself as a tool and subject in the course of evolving iterations over his career. Arman explained the difference: “When you break a straightforward crate, what you get is a Cubist composition, when you break a cello, you end up with something romantic.” His Untitled (2005) composition exemplifies this point. Comprised of a fiddle bass vertically halved, an action requiring precision, the space between holds within the frame of the body an accumulation of paint brushes drenched in rich hues of cadmium red medium, gold, and black in a proliferating and upward movement. With lush cadences, Arman re-presents a quixotic expression that transcends the two physical elements of its making. There is even an inference of synesthesia, an experiential correlation of musical sound and color arrangements that can be seen here, even by those without this extraordinary sensory skill. Arman’s facility to create, in Sam Hunter’s words a “shrewd interface between resemblance and dissemblance” is exemplified in the large scale tryptic, Untitled, 2004, with each panel comprised of a single standing bass arranged by a sequence of artistic operations – shattering, burning, and slicing – in a format invoking the history of religious art in the west, but also seen in Asian art and even modern photography. The metamorphosis of each of these objects is distinctive combining chance and precision that stabilizes the focus on each panel, but also generates a sequencing of these panels related to cinema and reinforced by the uniformity of the overall framing. In scale, the standing bass is comparable to the human body engendering an empathetic reciprocity, one that bridges the real with the poetic. With proximity and scale, each articulation of the standing bass is laid bare in altered states of breaking, contraction and cut-up parts of the whole brought together as if a visual summation.

Arman’s oeuvre is a series of turns– a balancing of the open-ended and the methodical; the sculptural and the painterly; the physical and the ephemeral. Within the present-ness of these works, memory and aspiration are set in flux as are the material fragments of bicycles, brushstrokes, and instruments. In all, they are, as Arman asserted, more than their material referent, they are works of art.  Rosemary O’Neill