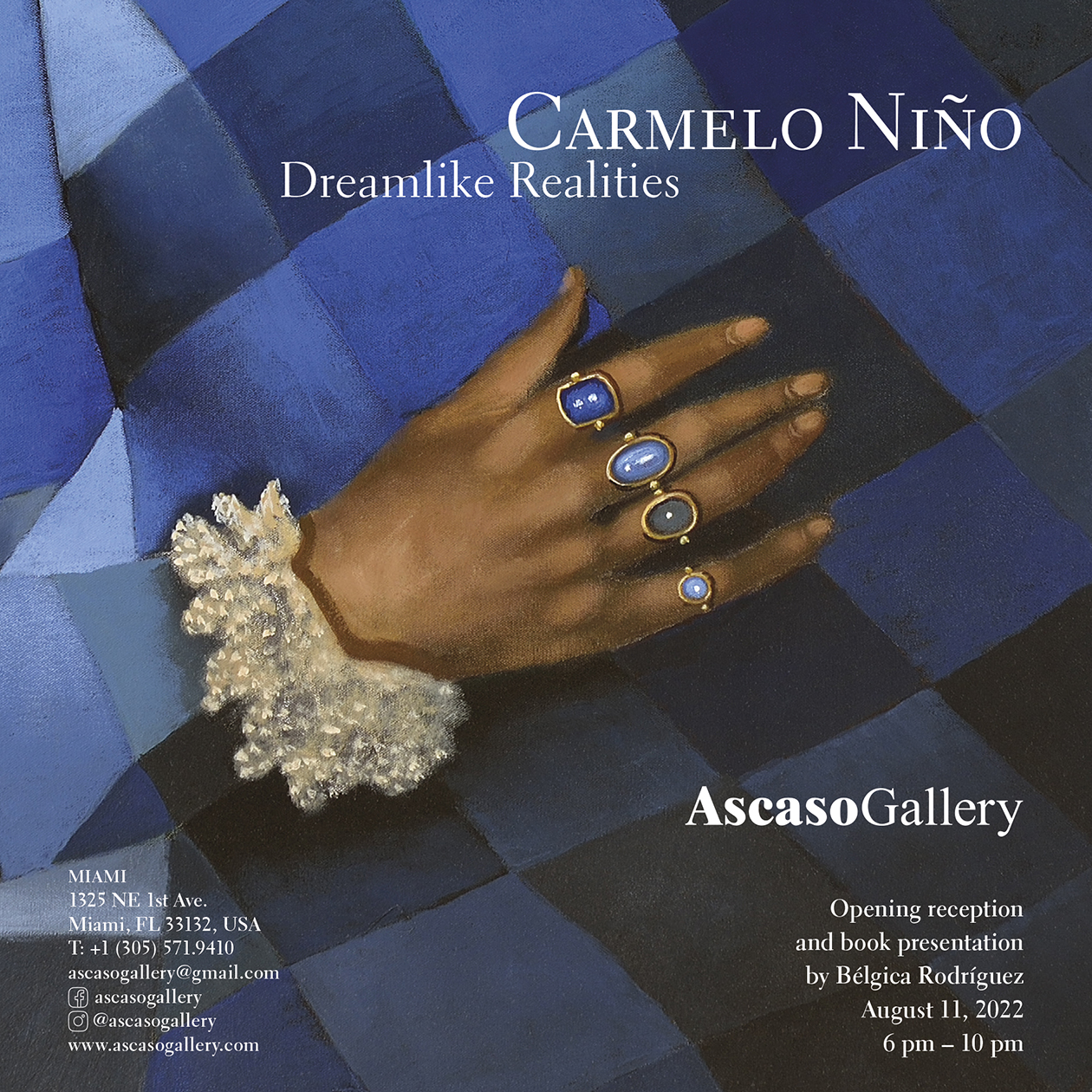 Written by Antonio Ascaso on August 5, 2022. Posted in

The mysterious daydreams of Carmelo Niño Exhibition at Ascaso Gallery, Miami.
Carmelo Niño, a Venezuelan artist originally from Maracaibo, Zulia State, an oil-producing region of Venezuela, is today one of the most outstanding painters in the plastic arts landscape in the country. Many years have passed since his birth in 1951 to the present, when he inaugurates this August 2022, a major exhibition at the Ascaso Gallery in Miami, with paintings from different dates resulting from the permanent and daily work of reflection, physical and intellectual, that he has always pursued in his creative life. Without neglecting a single moment of day-to-day life to be in front of the medium-sized canvas on the easel or of larger canvas hanging on a wall, he works in his large studio in the area of El Junco, outside the capital city of Caracas, surrounded by lush green vegetation, with a wonderful climate of pleasant temperature and poetic mist that invites to the reverie and glorification of his life as a painter. From a very early age Niño and his family discovered his vocation for drawing, a discipline in which he showed a special disposition and talent. From this moment on he dedicates his life to art, to the practice of painting, starting from a fantastic and strange world of fantasy, close to surrealism, unfailingly influenced by the circus of fantasy owned by his mother and a musician father.
These circumstances will shape the artist’s life. His traces and influences from the beginning will be present in his creative work, especially through the memories of the infinite curiosity to look, touch and be enraptured by the strange furniture and objects from his mother’s circus that he knew were deposited in a room of the house.
This universe of fantasy will leave an indelible mark on his subconscious and will serve as the thematic and artistic support for all his work. In an interview conducted by the critic Roberto Montero Castro in 1977, Carmelo Niño states, “the symbols of my painting come from the everyday life”.
His life has been one of continuous work and effort. At the age of fifteen he enrolled in the School of Arts of Maracaibo, graduated three years later, 1966, and immediately, with a scholarship, he travelled to Spain, took a few courses at the San Fernando Academy in Madrid, strengthened his preparation in art workshops and in frequent visits to the big museums of this European capital. With a sensitive gaze he penetrates the mysteries of masterpieces of the great artists who have made the universal history of art. His life as a painter has been intense, of intense study, preparation and work. With much composure and modesty he talks about his life and his artistic production, recognized not only in Venezuela, but also internationally. His participation in exhibitions began in 1969 and as early as 1970 he held his first individual exhibition at the Fine Arts Center of Maracaibo. From these dates onwards successes started to come, with the participation in collective and individual exhibitions, in Venezuela and abroad, as well as the awards from 1971, when he won the Scholarship Award at the First National Salon of Young Artists in Maracay, Aragua State; in 1972 he was awarded the Second Prize at the Regional Salon of Maracaibo. 1975 is the year of awards, he received the First Prize at the IV Salon of Young Artists in Caracas; the Aurelio Rodriguez Award at the IV Avellan Salon in Caracas and the First Prize at the Salon of Young Zulian Artists in Maracaibo; he also participated in the group exhibition of History of Painting in Venezuela, at Casa de Las Americas, Havana, Cuba; and in 1976 he was invited by Jose Gomez Sicre to take part in the exhibition of Venezuelan painting at the Museum of Latin American Art of the OAS.
But his recognition came in 1977 when he had his first solo exhibition in Caracas, at the prestigious National Art Gallery- a national museum dedicated only to Venezuelan art, where he was invited as a young talent, three distinguished critics of the country dedicated texts on the artist’s work: Juan Calzadilla, Roberto Montero Castro and Sergio Antillano; and in 1981 when he received the First Prize in Painting at the First National Salon of Young Artists at the Museum of Contemporary Art in Caracas. His paintings have been shown at the Biennial of Sao Paulo, Brazil and at the Venice Biennial. And so the achievements of this artist have continued until this outstanding exhibition at the Ascaso Gallery in Miami, 2022.
Since the beginning of his career as a painter, Carmelo Niño has been a figurative artist, always obsessed with almost mythological, timeless and absent characters that he encloses in architectural modules or places them in dreamlike landscapes where they are an integral part of that landscape. Without straying from the traced route, he continues his work in the silence of his studio surrounded by canvases, brushes, paint tubes and through large windows he enjoys the beautiful Dionysian landscape that surrounds him and delights the spirit.