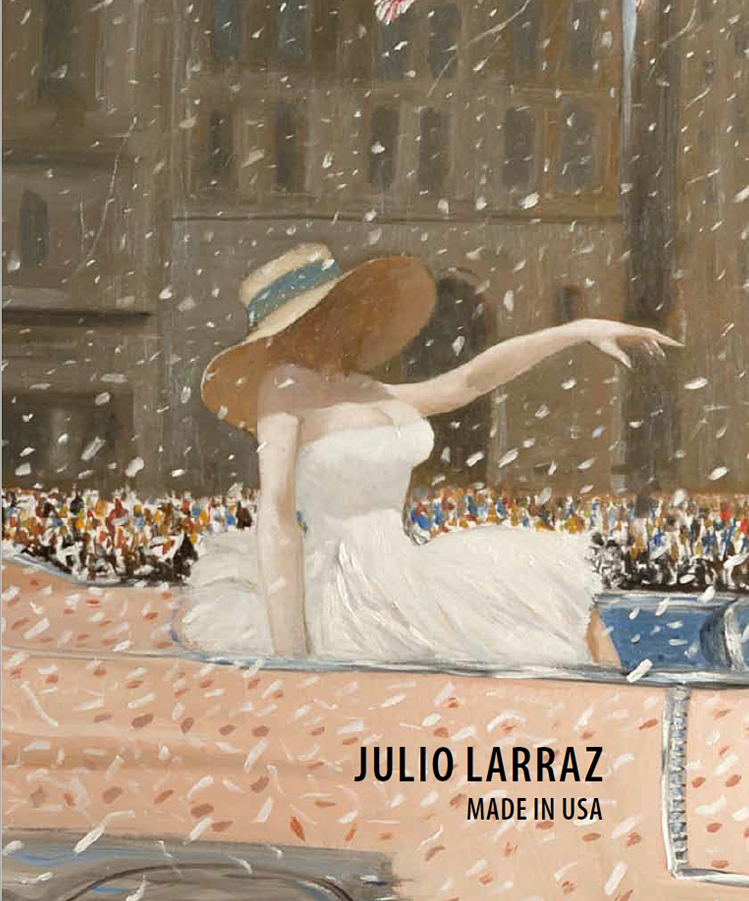 Written by Antonio Ascaso on September 21, 2016. Posted in

Three currents merge and reconfigure in Julio Larraz’s work—as do the waters of rivers, clouds, and ice he often paints—and these are: still-life turned into theater, theater seizing the moment in rebellion against plot, and character defying its persona. The three currents together articulate this great artist’s enduring primary concern: the representation of mystery escaping resolution to become the hedonist’s enigma, an inexhaustible, celebratory insistence on the imagination’s life in the luminous moment.

Of course, paradox is always in attendance in Larraz’s art as, indeed, in all art and its interpretation. For all the delight in the moment, Larraz’s works are profuse in allusions to Western antiquity—Homer, the Bible, Hesiod, ruins—and its Mediterranean settings—Cumae of the oracle, Sicily’s lunar coast. Larraz often pays homage to the poet as the archetypal guardian of ecstatic, singular witnessing, his residence, a three-dimensional mandala of semispherical dome atop a cube, crowns and centers chasm, delta, and sky. It is the pinwheel axis of aesthetic and historical consciousness, bastion, cradle, the outpost of martyrdom, the silent dwelling the erosions of time have turned into sculpture. One can imagine all Larraz’s still-lifes set within this edifice, solitary amid indifferent enormity, a duel’s fallen glove from the continuous human challenge to time and world.

The myriad slippages of subjectivity and its projections are primary concerns in Larraz’s exploration of character. Dog, stingray, and other animals face off with the viewer, symbols they have become of awareness and its posturings. In contrast, humans turn away, sleep into binomial tableaux, hide behind fractal fogs. They become bodies on parade we desire, waving beneath the shroud of a huge hat. They become shades wearing shades above grins or tight lips. Caricature, lust, or indifference are the scornful patrons of our social interaction, and this compels us to turn the world into the unedited cinema and shifting portrait of the depths of consciousness where dream, revelation, and creativity coalesce. It is a chilling portrait of the contemporary agora, gutted by the final tally of millennial greeds and frivolity, a world in which flawed recollections of oracles and poets stalk the vestigial arena of a long-erased circus.

And yet beauty never gives up the fort. The still-life as synecdoche enacts the epic’s fundamental struggle of the individual against destiny and the labyrinths of time and history on the theatrical stage of a table. Perhaps alluding to a poem, this time the modern Robert Frost’s ‘After Apple-Picking,’ a slab of ice distorts our view of fruit, sea, sky and sill as much as time and space themselves. The aqueous trinity of liquid, vapor, and solid enact the drama of representation and (as, versus?) reflection fundamental to all art, especially painting. The conquest of certainty in point of view becomes the first major objective, but it proves daunting if only because of the pleasures of distortion, the distractions of the flesh of moment. It is pleasure and not uncertainty which ultimately makes aesthetic consciousness reject solipsism, which is the poet-as-hero’s greatest adversary, and replace the battlefield with the harem of art.

Nonetheless, it is in Larraz’s still-lifes where we receive his most poignant existential mise en scenes. Lobster’s brimming the pot which fuses the distillations of geometry with the cradlings of home recall a familiar Larraz theme in still-lifes: inescapability. A translucent skull reminds us that we are all melting and quickly, and the luminescence of legacy is not a consolation. Behind the skull a mountain of ashes in the hearth, fusing again the warmth of shelter with the scourge of mortality. Still-life, too, governs the oneiric juxtapositions of Victorian houses with the Moon and the returning penitent facing The Big Engine of judgment. Home is a reality as alien as an orbiting desert that cannot reflect us and to which we can neither belong nor return.

Conversely, the dramaturgy of Larraz–the chromatic, compositional, thematic, and textural delights in which he indulges, plays a fundamental, if not protagonist, role in his art. We are reminded in these numbing times that painting has always been conceptual and dramatic, but that unlike the prattle of contemporary installations, it continues to be enigmatic (as opposed to obscure and confusing) and hedonistic (as opposed to pedantic and journalistic). The world beckons like an inevitable siren. The only way to the bliss of its rocky shore is through Art and its tireless, tradition-grounded breakthroughs of the imagination. 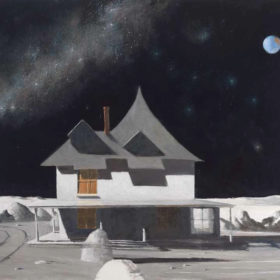 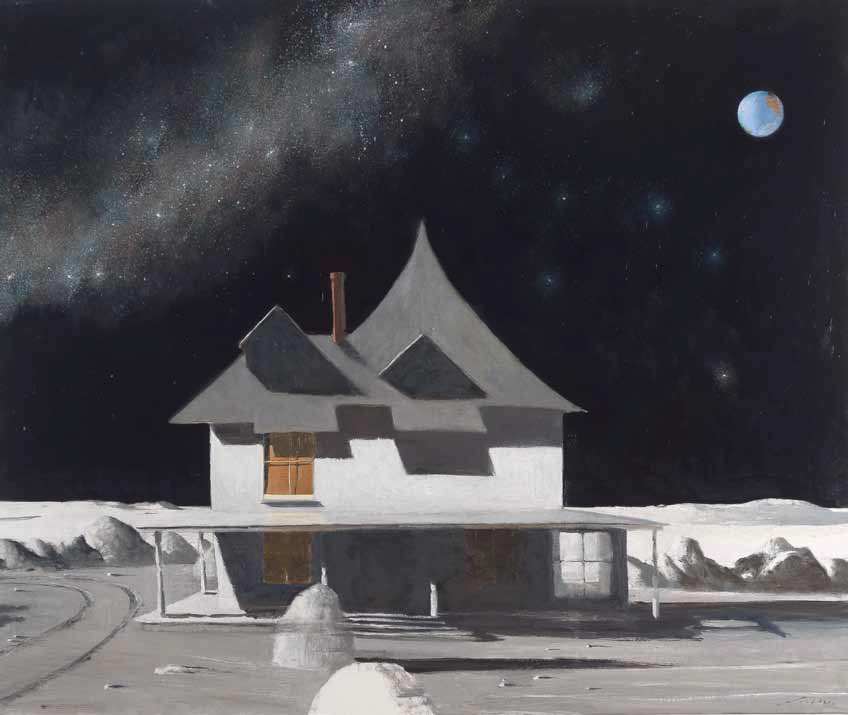